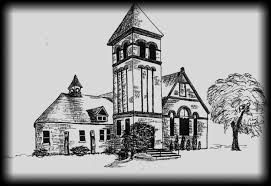 (For a video – check out our video on Youtube.)

1811 – The Town of Prescott was founded by Colonel Jessup’s grant and, because of its situation at the head of the rapids and with its good anchorage of deep water, became a place of military and commercial importance. The first Presbyterian minister to come to these parts was the Reverend William Smart who was sent out by the London Missionary Society to Elizabethtown (now Brockville) in 1811.  His parish extended from Gananoque to Perth and Cornwall, and he conducted services in Prescott, chiefly among the soldiers at Prescott’s Fort Wellington.

1820 – Upper Canada was almost unbroken wilderness; travel was by water, bridle-path, or ill-constructed stage-road. United Empire Loyalists and settlers from England, Ireland and Scotland built homes along the St. Lawrence River. They brought them their possessions, and what to them was more important, their Christian faith.

It was to Prescott that the Reverend Robert Boyd, M.A. came in 1820. At first, he taught school during the week and preached on Sundays in the stone schoolhouse located on the site later occupied by the Hotel Alexandria.

1821 – The Presbyterians soon organized a congregation and extended a call to the Reverend Boyd who became inducted as their minister in February 1821. Soon thereafter, plans were made for the building of a frame church thirty-six feet by fifty feet. The land for this site was a gift from Mrs. Jessup, widow of Lieutenant Edward Jessup, son of Colonel Edward Jessup.

The Reverend Robert Boyd was an indefatigable worker, possessed of a vigorous and hardy constitution, and with Prescott as the centre, he laboured in a large parish over 30 miles square in the townships of Augusta, Edwardsburgh, Matilda, Oxford, South Gower, Mountain and Elizabethtown. Thus, Prescott became the parent church for several congregations where churches were built – Cardinal in 1827, South Gower in 1830, Spencerville in 1837, North Augusta (Bellamy) in 1840 and Mainsville in 1841. Distinguished as a great preacher, Reverend Boyd spoke for civil and religious liberties and was always found on the side of popular rights.

1831 – The Synod of  Upper Canada was divided into two presbyteries: Brockville and York (Toronto). In 1851, Boyd was elected moderator of the Synod. In 1856, he received his Doctor of Divinity degree. In 1863, he resigned his charge after 43 years of service. He and Mrs. Boyd continued to live in the manse which they later bequeathed to the congregation. Doctor Boyd died in 1872 and his wife died two years later.

1849 – With plans for the railway passing through Prescott in the following year, the congregation started plans for a new stone church to replace the outgrown frame building that was moved to the south side of Dibble Street where, for a time, it was used as a school. The stone church was erected on the original site. It had seating capacity for 397 and church records show that the average Sunday morning congregation was 380 in 1863.

1890 – On January 13, 1890, the stone church lost its spire in a heavy windstorm. On that date, the spire crashed onto the Anglican lawn, narrowly missing several people.

1892 – On January 31, 1892, fire destroyed the church building and the manse. The following morning, the congregation rallied and planned for the construction of the current church. The corner stone was laid five months later. The new building was opened, completely fitted with the pipe organ, a piano and all furnishings, within fourteen months after the fire. All debts for the new construction were cleared in six years.

1957 – Under the ministry of the Reverend Alexander Morrison, the organ was rebuilt and rededicated.